In her work, Ourika, Duras weaves and portrays the complexities of race and belonging as she takes the reader through Ourika’s mental turmoil and degradation after she realizes that her skin color sets her apart in the French society. Ourika is a black woman who was brought up in the French society around the time of the French Revolution by a wealthy French woman. She had lived a happy fulfilled life, unaware that she was any different from those she lived with and that her skin color set her apart, until she heard one of the guests voice her concern about Ourika’s future.

The words “I see the poor girl alone, always alone in the world,” change Ourika’s life and the way she views herself. The story is one of isolation and the inability to call anyone your own. On one hand, Ourika begins to hate her skin color, doing whatever is in her power to keep herself covered and to never face who she is. On the other, she desperately wishes she could just be a slave so that she would at least have a hut to return to at night and people to call family. Another layer of complexities is added when Ourika realizes she has feelings for Charles, one of the boys she grew up with. Charles tells Ourika that he wants “a trust between us exactly like yours and mine,” when she inquires about his fiancé. He wishes his relationship with his wife to be exactly the way it is with Ourika but he does not wish Ourika to be his wife. This further troubles Ourika as she, both, wallows in self-pity and blames herself for putting her happiness over Charles.

This novel has been called the “first serious attempt by a white novelist to enter a black mind” and raises many questions about race, identity, and belonging. It’s layered complexity adds meaning to the text and exemplifies the many different forms othering can take. I definitely enjoyed reading this work, though I still have not been able to make up my mind about how successful Duras was in writing from the perspective of a black woman as a white duchess. It can be argued that Duras has objectified race in this novel to use it as a means of isolation without giving Ourika any real Senegalese background, but that perhaps adds to her identity in the sense that she is only black by the color of her skin but has been brought up as a white woman would be.

Though I could say a lot more about this novel, I think it would be best if everyone read it for themselves and made up their mind! This novel is definitely a worthwhile read! 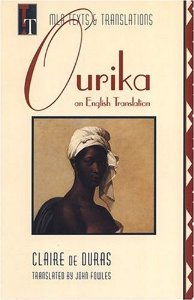