During the 1920’s, the protagonist of the story Tessa Gray goes to London to meet with her brother Nathaniel Gray. There she meets two women named Mrs. Black and Mrs. Dark. They kidnap her, and tell her that she has to use her powers if she ever wants to see her brother again. They make her change into other people and tell them what the people she transforms to are thinking. After a while the Dark sisters, as Tessa calls them, tell her that she is going to be married to a man named the Magister. Tessa is appalled by the concept and tries to escape, but not before she is rescued by a peculiar man named Will Herondale, who calls himself a Shadowhunter, someone who is half angel and half human. He takes her to a place he calls
the London Institute, and she meets the other shadowhunters who live there, including a woman named Charlotte and her husband Henry, Will’s best friend Jem, and a girl named Jessamine. The Shadowhunters help Tessa find her brother and give her refugee inside the Institute in return of her helping the shadowhunters find the Magister.

One of the best parts of this book is the dynamics of the character’s relationships. Will and Jem are total polar opposites, with Will being brass, moody, and sassy and with Jem being calm, level headed, and kind. Charlotte is smart, kind, and very hardworking, but struggles to keep her power as the head of the London Institute, as this was in an age where no one really believed a woman could do a man’s job. Henry also works hard, but he is clumsy and a bit clueless. Jessamine thinks of herself as a true lady, and despises the fact that she is a shadowhunter. Tessa is very curious and studious and is determined to get her brother back while at the same time, struggling with the fact that she isn’t human.

I absolutely adore the writing style of the book, as you really get a feel for the time and setting. The characters she writes are very developed and all have great backstories. The story itself is very original and actually has a good love triangle. I love how the setting and the time period
affects the story in a way that is relevant and adds more depth to the story. One of the great things about this novel is that even though it’s a prequel to Cassandra Clare’s series of the Mortal Instruments, it’s stands well as its own book and doesn’t rely on the original series. I would recommend this book to teens and young adults who are interested in fantasy novels with a completely new and original world. 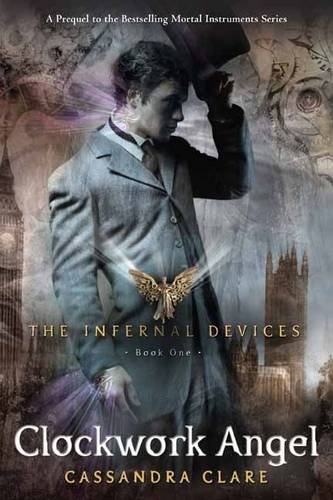